I made this microblog today:

the idea is to liberate zines people might still have the digital archives for, and let others people print and distribute them.

i like the 8 page + poster layout a lot, since it can be created and reproduced very quickly.

you can post zines right here, right now on urbit by posting in this notebook: web+urbitgraph://group/~pinsyt-nossub/mind-dump/graph/~pinsyt-nossub/zines-2027

if you’re not on urbit yet, feel free to message me with printables + info and i’ll post for you.

i’ll award 1 L2 planet for anyone from the stp community not on urbit yet if they share a zine.

~ urbit 101 for serving the people

hi stp people! i'm lukas, a musician. i'm not associated with urbit, besides following the project for ~2 years, having my own planet (~pinsyt-nossub) and being active on the network.

i'm doing this write-up, because i've been wanting to do do something like it for a while. i finally onboarded to urbit in 2022, after the L2 rollout and stumbled upon the https://stp.world group on urbit yesterday, right before going to bed.

i hope this is a helpful 101 for those that would like to start exploring or using urbit.

go to urbit.org and read a bit and then come back.

there's a lot of docs, but basically, my daily driver urbit looks somewhat like this: 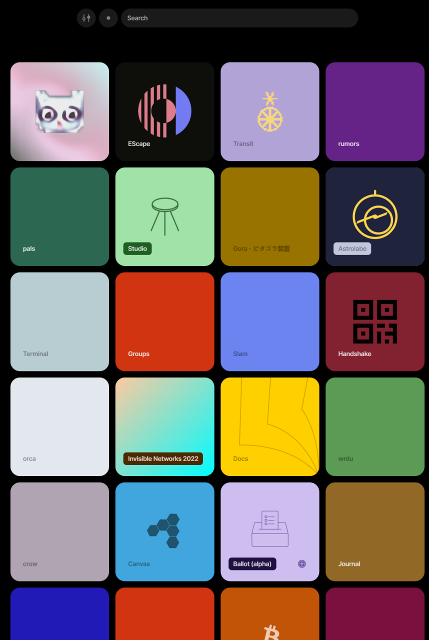 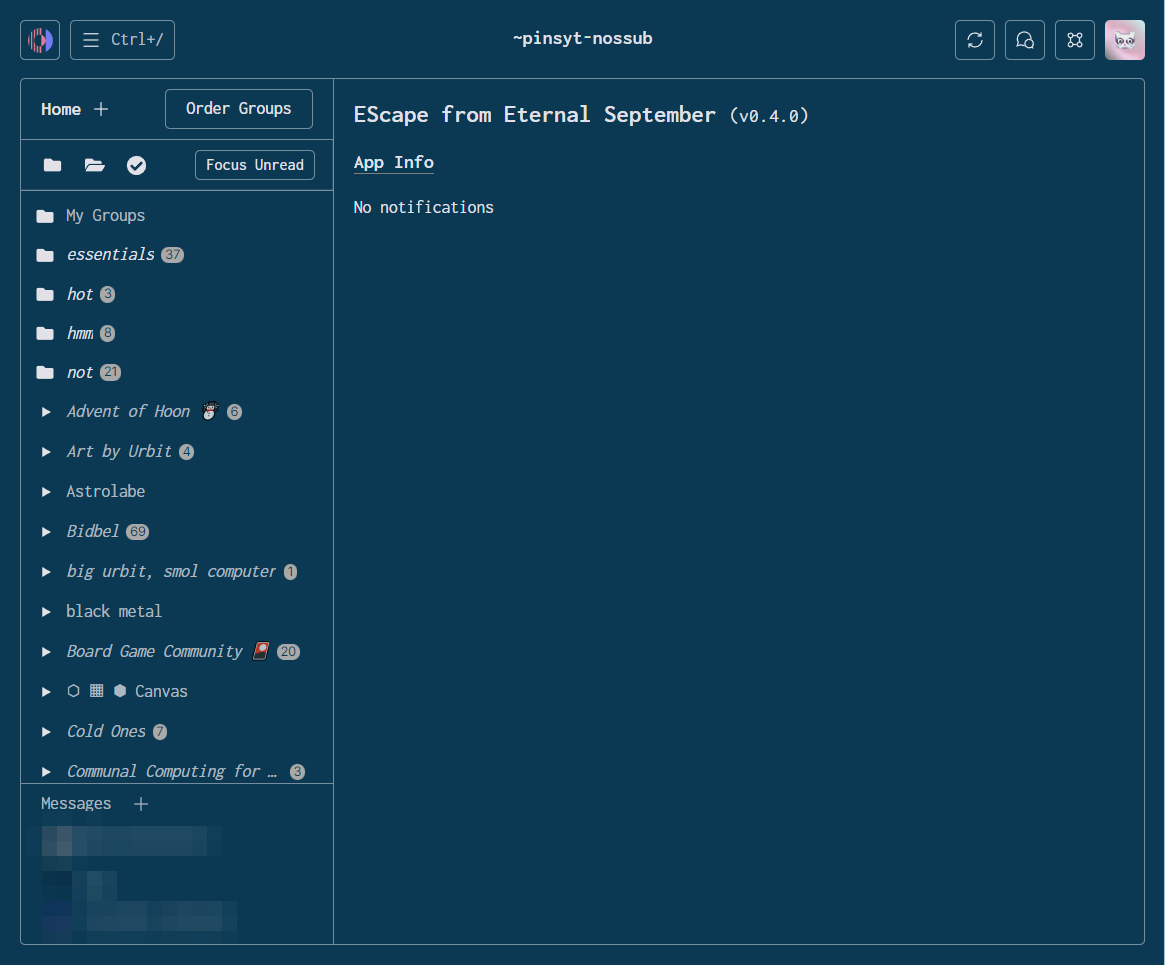 and there's cool communities like this one and all sorts of other nooks and crannies.

right now on urbit, you can:

how to start using urbit

you can check out the p2p network completely for free with a temporary identity called a comet please note that this is more like a throwaway account, so don't start building on this. (also note, that some communities might not accept comets)

you can get yourself a permanent pseudonymous identity to make yourself a digital home on your computer, self-hosted or through a hosting provider. i got my urbit id (also called a @p or planet) for free at imperceptible.computer (again, not affiliated or anything)

a full link to a group looks like this:

you can click it and join the group. references also work for messages, links to chats, notebooks etc.

first of all, here are a couple of very essential groups:

very good starting place. there's a help chat and a general discussion chat. you can read the backlog and people are friendly, also towards comets.

this is where i found out about STP! there's no central registry of groups, but this is as close as it gets.

guess you know more about this one than i do!

has a collection of apps in it. people develop and publish here, so it's a nice place to find new apps to try out. please note, that there is no centralized "app store", so there might be more apps out there that are not in this group.

(yes, you can make an app just for you and your friends)

urbit foundation. please note that they have a grants program. from my pleb understanding, they are currently looking for good ways to onboard people.

if you like exploring on your own, the groups above should be a great starting point.

~sitful-hatred was very helpful by providing guides on his website and also troubleshooting a bunch of issues i had when i moved my ship from my computer to a vps. thanks.

at the end of this post there is a list with a lot of groups in no particular order for you to check out. it's not complete or anything, but let's move on for now.

you can find apps, either by searching for them on the start screen on top, where it says "Search" by looking for the name of the developer (for example, ~paldev)… but how would you know the developers name?

as mentioned, above, go to this group:

if you read this on urbit: check out the list below! you can just click it and it will install. (give it a couple of moments)

This one's a different interface for browsing groups, chatting etc. allows you to make folders for your groups, among other things.

Once a day, something marvelous happens. Don't want to spoil it.

add people and have them be your pals! you can see who you added, who added you, and it displays a smiley face if both of you added each other. seems very simplistic, but this works together with other apps (escape, rumors… i guess more soon)

this one's fun. basically you can post text messages anonymously on a wall. you can see messages your friends AND their friends see. literally gossip.

~tirrel are working on a usd payment gateway so people can basically do substack here (and probably more). studio already allows you to set up a blog that posts to clearnet. if you're reading this on urbit, you can go to https://pinsyt-nossub.arvo.network/mind-dump and read it over there. i hope markdown rendering will work soon.

%gora allows you to creat proof of attendance tokens. someone described it very nicely today as "nfts without global consensus". very easy to create and hand to people, who then can display them publicly. if i understand this correctly, you should also be able to use this for gating content, but i haven't tried it yet or this functionality hasn't been built yet.

this one gives you information about urbit azimuth numbers. what's that? your @p is a representation of an azimuth number! 0 is ~zod. type in a number or type in a @p and see what it does. this one i use a lot lately for my data sonification stuff.

writing challenge that's already over for this year. app was built to submit and display content. very beautiful.

lets you access documentation of your installed apps, if available.

remember canvas on reddit? yeah, you can do your own collaborative canvas stuff on urbit.

"An app that allows you to vote with other ships. Built by Holium."

alright, so clearly urbit is working right now and people are building on it.

i saw a glimpse of what it might be in the future in a public notebook by ~fabled-faster. it was one of those "oh shit" moments, where ideas start to unfold because you glimpsed the underlaying foundations for a moment.

it was these 3 pictures. (sorry for hot-linking ed) 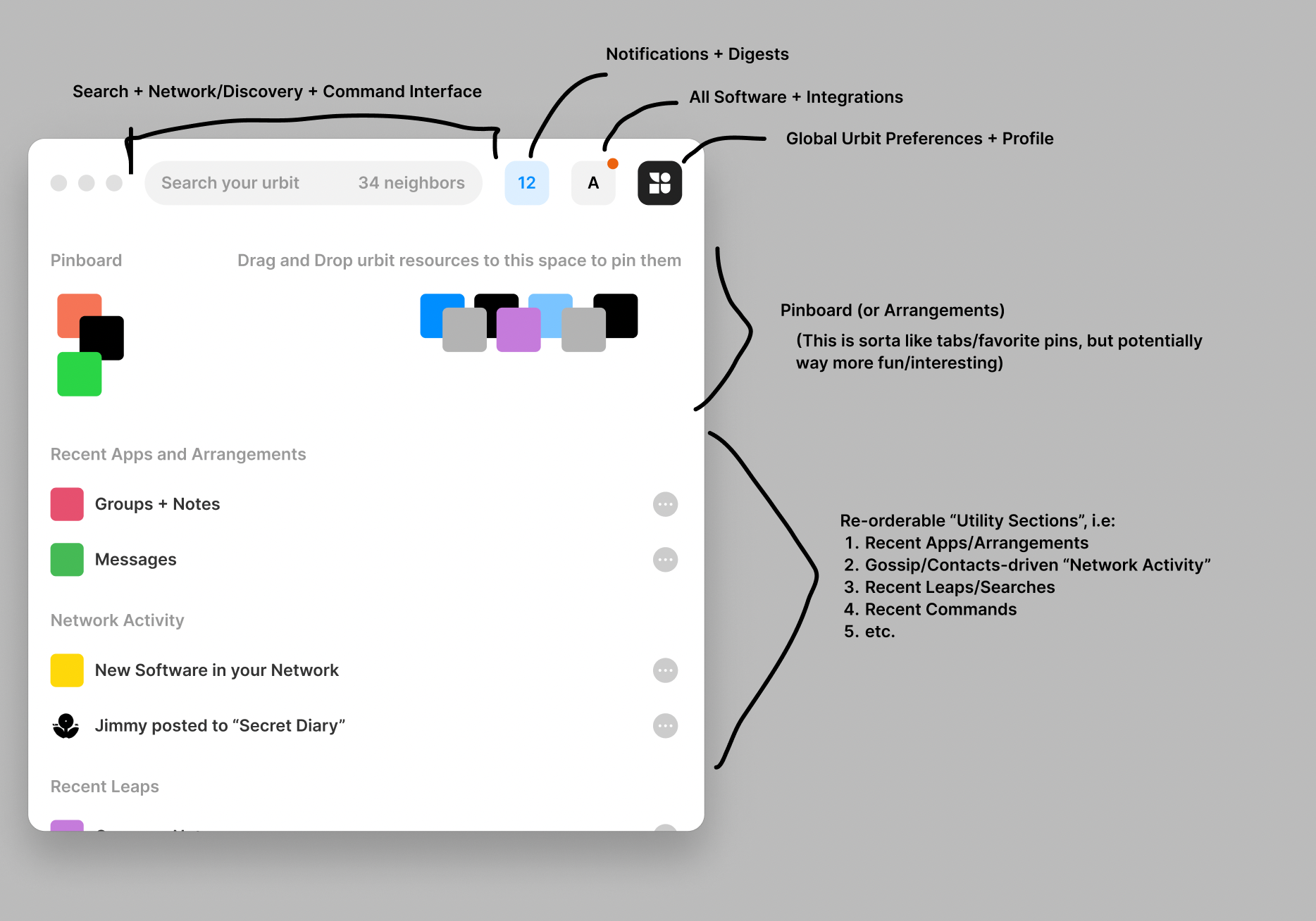 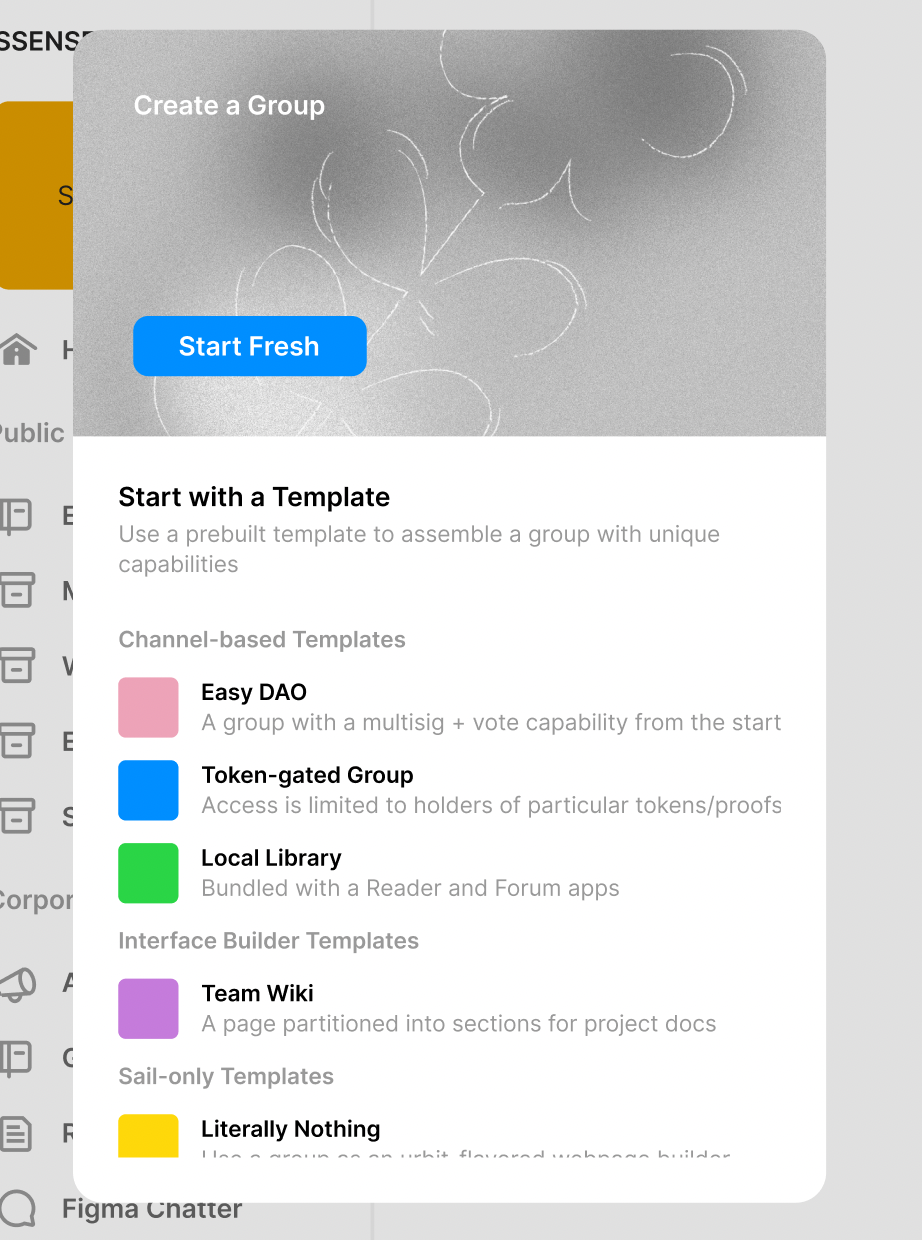 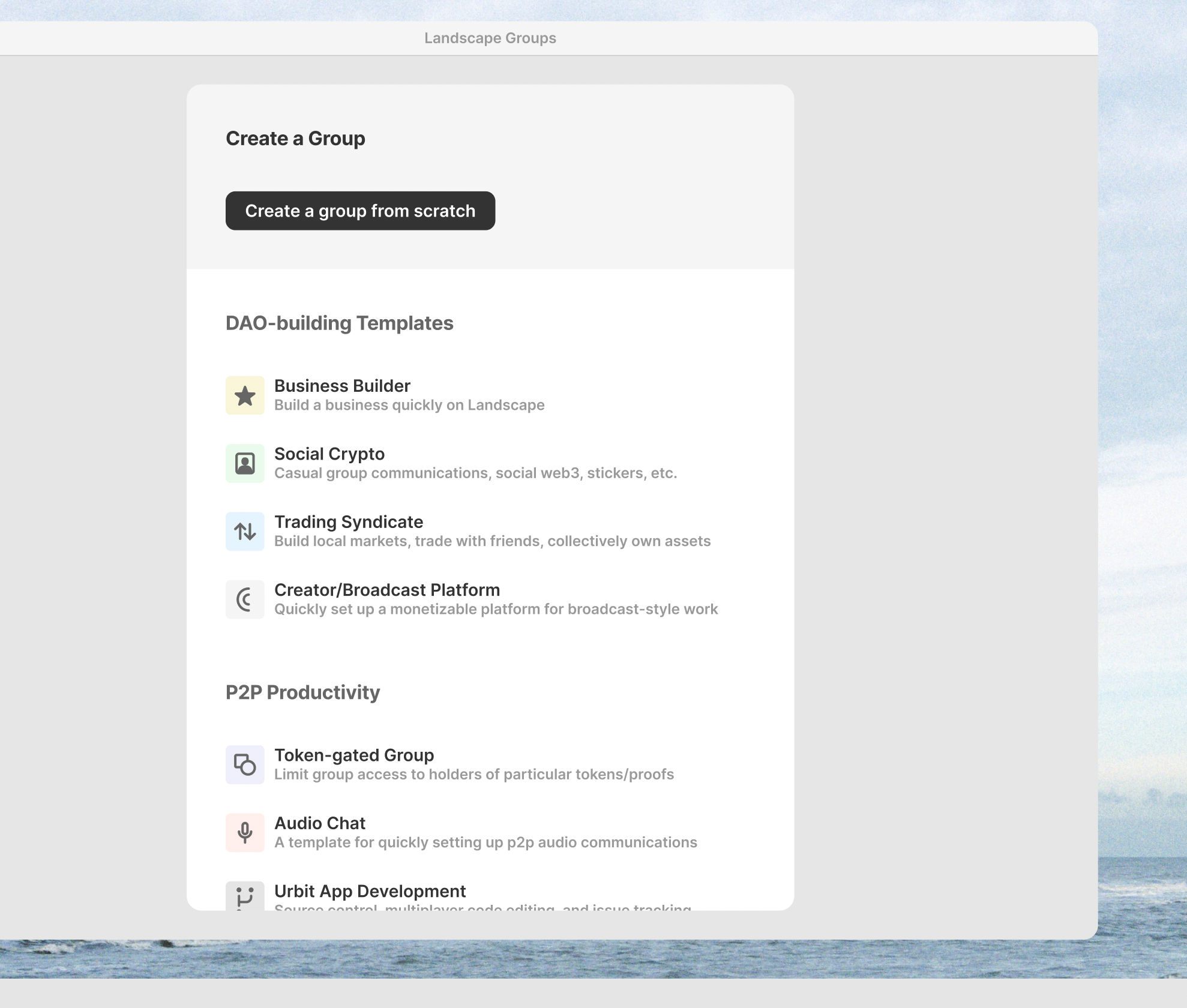 if i'm not wrong, those are mockups for the next (?) groups update interface. urbit is already very cool, but i don't see a reason for DAO's or other communities to keep using proprietary tools to communicate, unless they have very specific needs that somehow depend on old software stacks that need to be used or something along those lines.

a tiny, open source, self-hostable, platform-agnostic p2p OS with a cryptographic identity system baked in, that allows you to associate freely with other nodes and build groups with modular functionalities is something i'm glad to use every day.

there is stuff missing, but you can build the stuff that's missing, if you want to.

thanks for reading, i hope this helps!